I'm not much of a looter myself, but I think I would enjoy picking through the rubble of Qaddafi's palace. The big news today is that Qaddafi, who had previously expressed a soft spot for Condi Rice, had a photo album of pictures of her in his room. She must be seriously creeped out. Here's a shot of it: 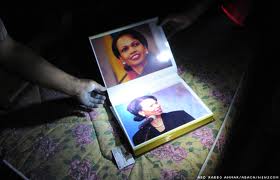 That doesn't look like the kind of thing we give as a gift, so I'm guessing someone in Libya made that for him. Yep, yuck.

Meanwhile, the "distinctive fur" the NY Times mentioned is probably this lovely hat: 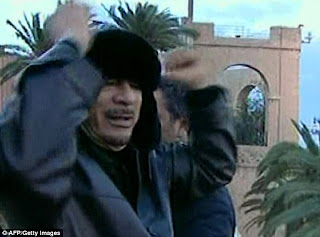 He wore it in February, and he clearly did some Jersey Shore-worthy fist pumping in it. I'm not gonna lie: I would totally wear that.

I am quite disappointed at the lack of Qaddafi loot for sale on eBay. Attention, rebels TNC forces: people would pay a lot for this (I actually yelled this at the TV as I watched someone walk away with it on Al Jazeera). Yeah yeah, stand on it a while longer, but then get it on eBay! 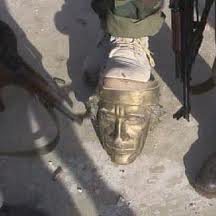 Posted by AnnieHall at 2:08 PM