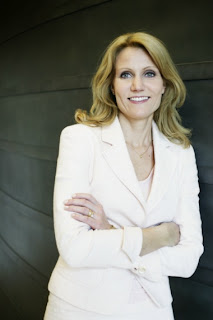 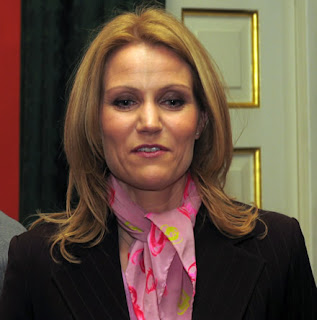 We at Your Bottoms have had a grand time deriding the fashion decisions of one Colonel Qaddafi. So when a prominent politician from Denmark heads to Libya dressed to the nines, the comparison can't be avoided. Helle Thorning Schmidt, Social Democrat party leader, has set hometown media abuzz by being photographed in a military plane en route to Libya.

No, she was not wearing a misshapen caftan with the continent of Africa scattered all over it, and no, her hair was not in a Moammar-Mullet. She was wearing a killer pair of stilettos and carrying a designer red patent leather handbag.

Why is this a bad thing? As fellow intrepid travelers who have seen their fair share of military flights, we know the unique challenges and opportunities such travel puts on your wardrobe. To look put together, strong and in charge is a sign of success, and this woman landed herself firmly in the Your Bottoms "DO!" column.

Helle Thorning Schmidt, we salute you. And though we couldn't find the exact photo of your fashion genius moment, these make it clear that you are fiercely fashion forward all the time!
Posted by ChicStateGeek at 8:23 AM No comments:

It's only June, but I feel like it's the week before Memorial Day in YBMMF land. I need to stop obsessing about Kate Catherine, although let me just say that this look, at the Epsom Derby, is absolutely incredible. 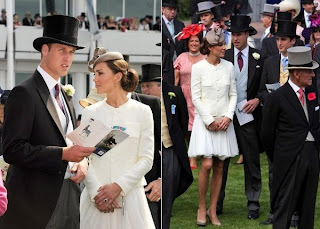 Our fearless American fashion stars have been pretty subdued lately. I suppose a dinner for Angela Merkel doesn't call for avant-garde effort, but really, the pictures almost put me to sleep. After going through them, the only guest who deserves any sort of plaudit is Google VP Marissa Mayer: 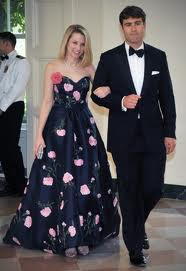 Well-played! However, when you are the most inherently glamorous person at the party, and the only one I've seen in Vogue recently or am likely to see soon, you have a leg up to begin with. It's June, people. You're eating in the garden. Show your arms! Try florals!

Finally, Sec. Clinton has been traveling a lot lately, and I thought we'd get some good pictures out of that. However, look at this Libya Contact Group photo only if you want to be put to sartorial sleep. 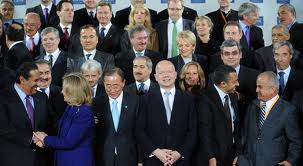 I know that a meeting on Libya doesn't call for sparklypony fancypants glee, but really peozzzzz I totally fell asleep there.

Let's go people! Do something crazy! At least the Price Albert wedding is a few weeks away - that should bring out some effort.
Posted by AnnieHall at 9:06 AM 2 comments: